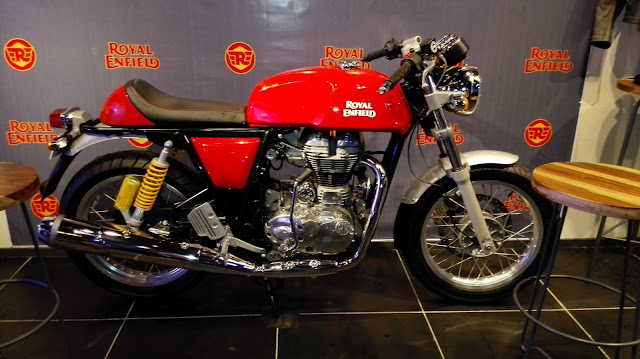 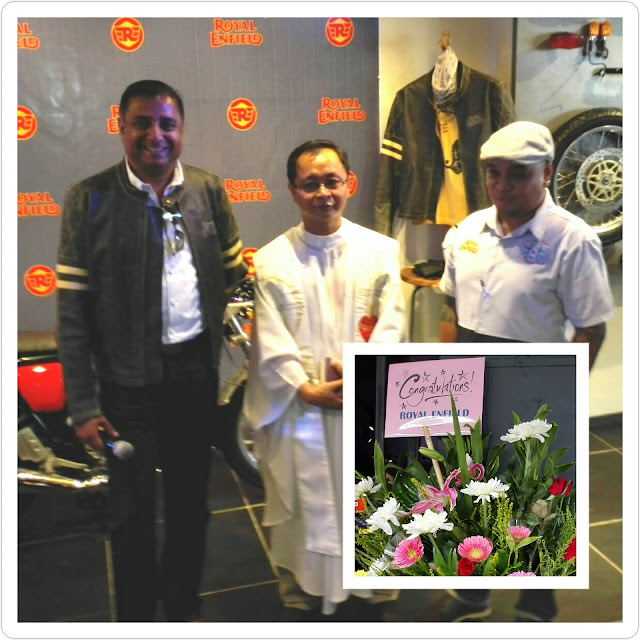 This is a part of Royal Enfield’s nodal city approach and focused international thrust of leading and expanding the global mid-sized motorcycle segment (250-750cc). The first exclusive store in Manila has been set up by the Hardcore Brothers Custom Motorcycles, Inc.

Speaking on Royal Enfield’s first exclusive store in Manila, Mr. Arun Gopal, Head International Business, Royal Enfield said “Royal Enfield is striving to provide an immersive retail experience for its customers that forms an integral part of the company’s core retail strategy, globally. Our store in Manila showcases the heritage and philosophy of Pure Motorcycling. The space has been designed not just as a point of purchase but as a meeting point for enthusiasts and for conversations around motorcycling.  The store will be retailing the full range of Royal Enfield motorcycles and gear and will be great starting point for them to experience the brand.” 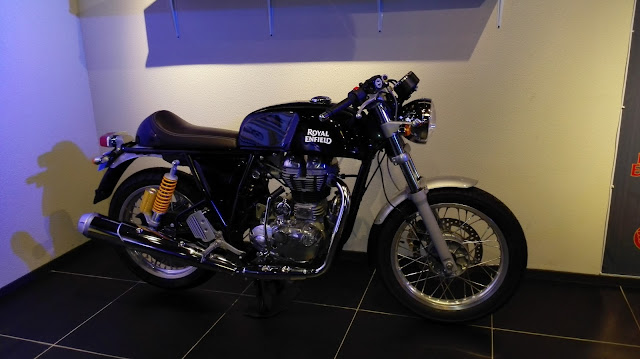 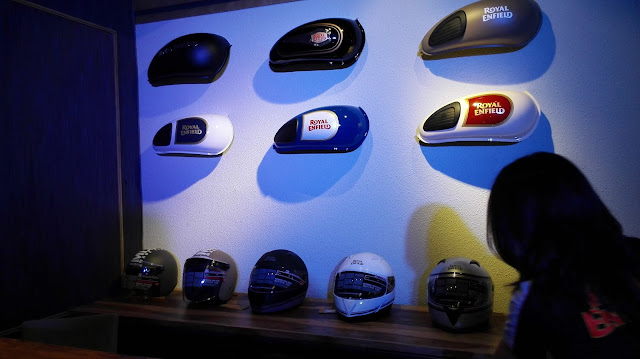 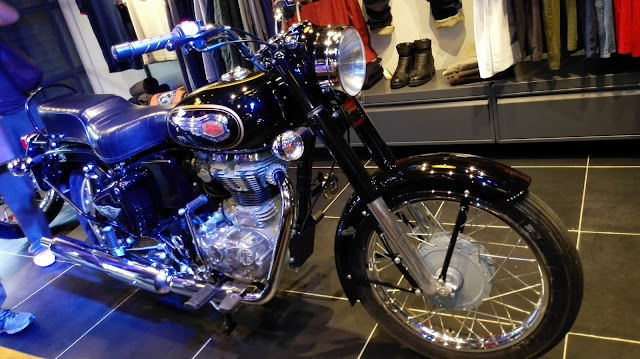 Designed as a motorcycle enthusiast’s living room, the 972 sq.ft Royal Enfield store in Manila, has been created as per Royal Enfield’s new brand retail identity that showcases its philosophy of “Pure Motorcycling” in every aspect of the Royal Enfield ownership experience. The store features an interesting visual merchandising format and innovative product displays, which include the use of bits and bobs from Royal Enfield motorcycles and photo frames that speak of the Royal Enfield’s heritage. A full blown wall display of a stripped down Continental GT showcasing the bike’s internals and frame depicts machine love where the rider derives sensorial joy through tactile interplay with his motorcycle

Speaking on the Philippines market Arun said “At Royal Enfield, we feel that Philippines is an important emerging 2-wheeler markets in the south east Asia yet it is largely underserved in the mid-sized segment. With the commuter segment forming almost the entire 2-wheeler industry, Royal Enfield presents a huge opportunity for the customers to upgrade to more evocative motorcycles. It was here in Manila four years ago that Royal Enfield opened its first exclusive store in south-east Asia and now in a new brand retail identity, we are sure that customers will find the retail experience much more engaging and appealing” 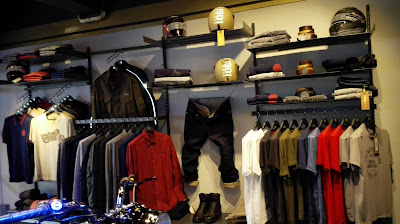 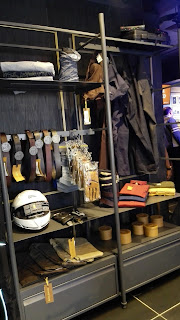 Royal Enfield designs classic styled motorcycles that are simple, evocative, tactile and fun to ride, providing riders with a “Pure Motorcycling” experience. Blending traditional craftsmanship with modern technology as a means to achieve the perfect balance between the man, machine and the terrain, Royal Enfield motorcycles create a unique experience for riders which is approachable and unintimidating.

Speaking on Royal Enfield’s presence in Philippines, Jimmy L Barinaga, President & CEO Hardcore Brothers Custom Motorcycles Inc said “Royal Enfield has grown steadily from being practically an unknown player to becoming an aspirational brand after we introduced it four years ago in the Philippines. The timing is perfect for us to become a more meaningful player in this underserved mid-sized segment where we are providing customers with a differentiated motorcycling experience with our products. With Royal Enfield’s apparel and accessories (Gear), we will be able to provide motorcycling enthusiasts with a complete leisure motorcycling lifestyle in the country”

In addition to its entire line-up of products for Philippines, from its new store, Royal Enfield will also be retailing its latest range of motorcycle apparel and accessories (Gear). With Royal Enfield’s offering of purpose built, meticulously detailed and well crafted motorcycle gear, the riders will have a more enjoyable motorcycling experience.

The newly revamped Royal Enfield store located at Manila, is a full-service store and is equipped to provide service and aftermarket capabilities. Royal Enfield will work closely with Hardcore Brothers Custom Motorcycles, Inc to bring a differentiated experience for motorcycle enthusiast in the region.

During the 15 month period (Jan 2015 – Mar ’16) Royal Enfield sold over 600,000 motorcycles across the globe to support its global growth strategy and also announced its plan to sell 675,000 motorcycles for the 12 month period from April 2016 to March 2017. By 2018, Royal Enfield plans to manufacture and sell up to 900,000 motorcycles from two of its existing manufacturing facilities and a third upcoming facility, in Tamil Nadu, India. With a view to become the leader in the global mid-sized motorcycle industry, Royal Enfield is also building two new technology centres - one in India and one in UK, to enhance capability and execute long term product strategy. Royal Enfield recently announced its entry into Brazil along with the launch of its first subsidiary outside India in North America.

The oldest motorcycle company in continuous production, Royal Enfield made its first motorcycle in 1901. A division of Eicher Motors Limited, Royal Enfield has created the mid-size motorcycle segment in India with its unique and distinctive modern classic bikes. With its new manufacturing base in Chennai, India, Royal Enfield is able to grow its production rapidly against a surge in demand for its motorcycles. With 50% growth every year for the last 3 years, Royal Enfield is fast becoming a very important player in the global mid-size motorcycle market and is working towards re-inventing this space with motorcycles that are evocative and engaging and great fun to ride.
Royal Enfield’s product line‐up includes the Bullet, Classic and Rumbler models in 500cc displacements; and the recently introduced Continental GT 535cc café racer. Royal Enfield operates through 18 company-operated stores and 500 dealers in all major cities and towns in India, and exports to over 50 countries across the world including the USA, Japan, UK, several European and Latin American countries, as well as the Middle East and South Asia.
Royal Enfield also organizes and supports many motorcycling events and rides , more prominently the Rider Mania – an annual gathering of Royal Enfield riders from all over India to the lovely beaches of Goa, and the Himalayan Odyssey, the most arduous motorcycle ride over some of the toughest roads and highest mountain passes in the Himalayas. Royal Enfield also conducts the popular ‘One Ride’ where people around the world ride out on their motorcycles on the first Sunday of April.
To know more about Royal Enfield, the motorcycles, marquee rides and other initiatives, visit:  http://www.royalenfield.com.ph/
Be a part of one of the largest communities of motorcycling enthusiasts; like Royal Enfield on Facebook
https://www.facebook.com/RoyalEnfield
Follow Royal Enfield on Twitter
https://twitter.com/royalenfield