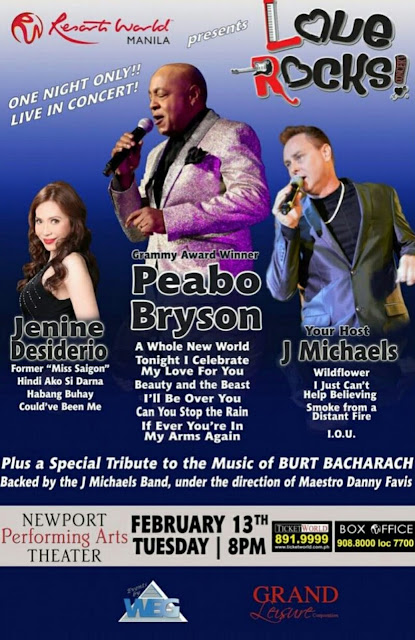 Spend this Valentines Season with love and the smooth sound of Grammy Award winner PEABO BRYSON as he returns to Manila to headline LOVE ROCKS!  For one night only, fans can catch Peabo Bryson, “The King of Balladeers,” live in concert, Tuesday, February 13, 2018, 8:00pm at Resorts World Manila, Newport Performing Arts Theater.

International recording artist J MICHAELS also returns to NPAT as co-headliner and host of the ongoing Love Rocks! concert series.  Former Miss Saigon JENINE DESIDERIO will complete this fantastic lineup as special guest artist, all backed by the J Michaels Band under the direction of Maestro Danny Favis.  The theme for the evening will also include a tribute to the music of Burt Bacharach, with each artist performing their favorite Bacharach tunes.

Peabo Bryson has established a career as one of the premier male vocalists in contemporary music of the last quarter century. Possessing a beautifully rich, almost operatic voice, this two-time Grammy® Award-winner has survived and prospered despite the passage of time and changes in popular musical trends. With twenty albums to his credit, Peabo Bryson has enjoyed an unprecedented across-the-board level of international success, Bryson has the distinction of being the first artist in music history to have separate records topping four different charts.

Bryson was among the premier silky-voiced soul artists who emerged as the softer, more sophisticated urban contemporary sound became dominant in the '70s and'80s. He made hit duets with Natalie Cole, Roberta Flack, Melissa Manchester, and Lea Salonga. Bryson enjoyed more success with “If Ever You're in My Arms Again,” “Can You Stop the Rain;” “Through the Fire” and “Unconditional Love.” Bryson won his first Grammy® Award in 1992 for his performance of the song "Beauty and the Beast" with Céline Dion. His second Grammy was awarded the following year for "A Whole New World" (Aladdin's Theme) with Regina Belle, being the only Disney song to make it to the Billboard top 100, and topping it at #1. With his tremendous crossover success, Peabo has transitioned into a world of international acclaim. Peabo Bryson is, at his intimate best, a legendary vocalist offering a timeless mix of pop and soul as only he can. Bryson has amassed a loyal fan base, critical acclaim and an avalanche of awards by being one of the “truly best friends” a song could ever have.

As lead Vocalist and Host of Love Rocks!, Manila-born J Michaels is an international recording artist and longtime showman who effortlessly shows incredible versatility in musical styles accompanied by some of the most talented musicians and backup singers. J Michaels has shared the stage with legendary rocks artists like Ambrosia, John Ford Coley, Dan Hill, Jimi Jamison, Terry Sylvester of the Hollies, Yvonne Elliman, Gary Puckett, Stephen Bishop and more. His online music videos, filmed on location in various countries, have quickly gained popularity with over 2 million new views in 2017, earning him fans worldwide, including many in Philippines.

LOVE ROCKS! is a trademarked concept show that has had great international acclaim and success.  Each show is hosted by J Michaels and features one or more Multi-Platinum and Grammy® headline artists.  The J Michaels Band has served as backup band for the Love Rocks! concert series pairing world-class concert and touring musicians with incredible guest headliners.  2018 marks the 10th anniversary of Love Rocks! concerts, fans can look forward to multiple shows an more great artists in the coming months.

This Love Rocks! Concert is presented in cooperation with Grand Leisure Corporation and Events by WEG Inc.

Posted by Made It Through Mum at 5:56 PM