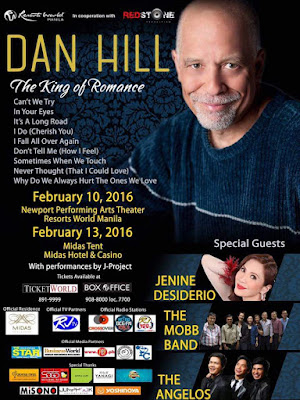 Last 2011, he did a back to back concert with Yvonne Elliman and Stephen Bishop. This year he will be back once again to serenade us with his top charting hits and spend the Valentines here in the Philippines, touring. Catch him as he performs on February 10, 2016 at Newport Performing Arts Theater, Resorts World Manila and on February 13, 2016 at Midas Tent, Midas Hotel and Casino.

With special guests; Jenine Desiderio, The MOBB Band and The Angelos.