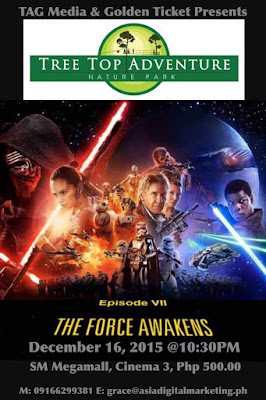 On December 16, 2015 at STAR WARS Advance & Block Movie Screening, 200 attendees will receive Tree Top Adventure Gift Certificates for you to not only experience the force in advance before anyone else but to #ExperienceTheExtreme whether you like to be in Subic or in Baguio.

Tree Top Adventure will have a table at Cinema 3, SM Megamall from 8:30PM to 10:30PM to support the movie screening. The organizers are expecting to have 800 movie goers and as of now, it's sold out. Golden Ticket is the organizer of this movie screening with TAG Media and Public Relations as the marketing and branding arm.

TAG Media and Public Relations will give away also limited edition Star Wars notepad brought to us by Alfox Printing Services. Just drop by to TAG Media table to receive one.

The Force Awakens is the first film in the Star Wars sequel trilogy, announced after The Walt Disney Company's acquisition of Lucasfilm in October 2012. The film is produced by Lucasfilm president Kathleen Kennedy, Abrams, and his long-time collaborator Bryan Burk. Abrams co-wrote the film with Lawrence Kasdan, who co-wrote the original trilogy films The Empire Strikes Back (1980) and Return of the Jedi. Abrams and Kasdan rewrote an initial script by Michael Arndt. John Williams, composer for the previous six films, returns to compose the score. Star Wars creator George Lucas served as creative consultant during the film's early production stages.

The Force Awakens is produced by Lucasfilm and Abrams' Bad Robot Productions and will be distributed worldwide by Walt Disney Studios Motion Pictures. Filming began in April 2014 in Abu Dhabi and Iceland, with principal photography also taking place in Ireland and Pinewood Studios in England.

For inquiries: TAG Media and Public Relations- 09166299381 or grace@asiadigitalmarketing.ph
Posted by Made It Through Mum at 2:52 PM