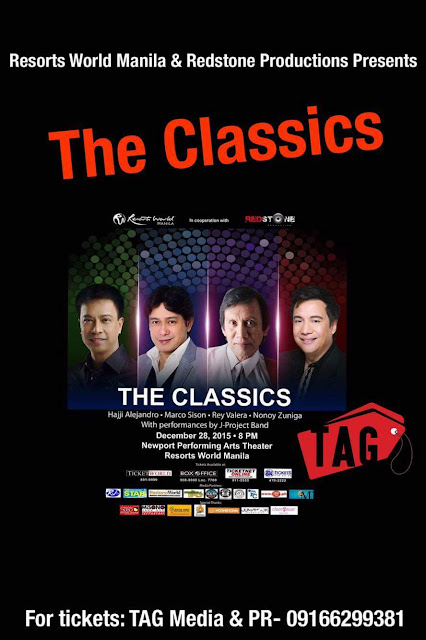 Mark your calendars for an unforgetabble gathering of four iconic Filipino artists - Marco Sison, Hajji Alejandro, Rey Valera and Nonoy Zuñiga -- together in one stage, one concert, and ONE NIGHT ONLY! "The Classics" brings together this incomparable four gentlemen for an enchanted evening of song, music and dance on December 28, 2015, Monday, 8PM at the Newport Performing Arts Theater (NPAT), Resorts World Manila.

Sison started his singing career after his triumph on a singing contest in Channel 7's noontime variety show " Student Canteen" in the late 70's and early 80's. Being one of the classic balladeers to have captured the true vocal essence of OPM in the '80s, Sison was responsible for the songs My Love Will See You Through [his biggest hit thus far], Si Aida, Si Lorna, o Si Fe, I'll Face Tomorrow, Always and Make Believe.

Rey is a well-known singer, songwriter, music director, film scorer and television host from the Philippines. He wrote and produced songs that were recorded by various singers, most notably Sharon Cuneta. He was a former host of the variety noontime show Pilipinas Win na Win alongside Rico J. Puno, Nonoy Zuniga and Marco Sison. He waxed his first single as a solo singer - songwriter with the song Ako si Superman, which he created supposedly for Rico Puno. His former boss at Vicor Records gave him the opportunity to sing his song and at the same time hired him as one of Vicor's in-house producers. Rey also made songs for other artists such as Rico Puno's Sorry Na, Puwede Ba, Daigdig ng Ala-ala, Geraldine's Pangako; Pol Enriquez'  Ayoko na Sa' Yo and many more. While he made songs for his peers, he made albums for himself such as ;
Naaalala Ka, Rey Valera Vol. 2, Walang Kapalit, Hello, The Rey Valera Christmas Album, Gabay Mo Ako, Rey Valera's Greatest Hits Vol. 1, Rey Valera's Greatest Hits Vol. 2, Pirapirasong Ala ala, Sa Kabila ng Lahat, Kung Sakaling Iibig Muli, FM Ka, AM Ako, Home Sweet Home, Ang Mahalaga, etc. Most of these albums made golds and platinums.

Zuñiga's singing career spans more than 3 decades, as a folk singer from 1971 to 1975 and then as one of the lead singers of the Family Birth Control Band which performed in the best nightspots and hotels like Philippine Plaza, Holiday Inn and The Manila Hotel from 1975- 1980. All his performances in the US from 1983 to the present are well-acclaimed. He has also performed in Asia including the major cities of Australia, Japan, South Korea, China and New Zealand.

This dream concert will have the four artists dishing out several of their signature pieces. "THE CLASSICS" is presented by Resorts World Manila in cooperation with Redstone Media Production Inc.

Tickets are now available at all TicketWorld, Ticketnet and SM Ticket outlets.
Posted by Made It Through Mum at 4:03 PM