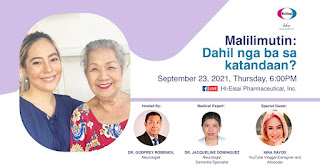 A medical expert has sounded the alarm on early and proper detection of dementia in the Philippines which is often misinterpreted as an aging problem or being ulyanin and malilimutin in Filipino terms.

Neurologist and dementia specialist Dr. Jacqueline Dominguez shared her knowledge on dementia and how to differentiate it from mere forgetfulness on the part of the patient.

HI-Eisai sponsored the webinar to raise awareness on dementia and related types of diseases.

"Dementia is a collection of symptoms with a decline in cognition, change in behavior, and impairment of daily function," Dominguez said in the live webinar held last Thursday (Sept 9).

She enumerated the types of dementia, including the most common one, Alzheimer's disease. Other types are frontotemporal, Parkinson's dementia, dementia due to traumatic brain injury, and dementia due to depression and other medical conditions.

For her part, digital influencer Nina Rayos acknowledged that there is still a lack of awareness when it comes to dealing with dementia.

Rayos is known on social media through her vlogs featuring her mother, Donya Toyang, who has been clinically diagnosed with Alzheimer’s disease.

She shared how it took seven years before her family learned that Donya Toyang was forgetful, not due to old age, but was inflicted with the disease.

"My mother started to show early symptoms of [Alzheimer's disease] in 2012, but we only just had her diagnosed in 2019. We didn't really think about it so much back then, thinking that maybe she's just simply getting old. She forgets a lot of things, and she always misplaces house keys and money," Rayos said.

What triggered her to finally bring her mother to the hospital was when the latter was hallucinating.

Rayos recalled how Donya Toyang started to become confused about basic day-to-day activities such as cooking and began to forget important details in her life such as the name of her children and granddaughter and the fact that her parents and other loved ones already passed away.

Dominguez said disorientation or hallucination is one way to differentiate mere forgetfulness from dementia. She said that is most likely dementia when someone's moment of disorientation already makes it hard for her to go back to reality and determine what's real or not.

"Early diagnosis prevents the disease from progressing. Elders suffering from dementia are treated badly because the family doesn't understand their situation," Dominguez explained.

Dominguez then highlighted the importance of the role of family and relatives in spotting the aforementioned symptoms. She said it’s the patients’ loved ones that can help direct them to appropriate medical responses to their condition.

Early diagnosis and treatment are important to help slow down the progression of Dementia. Visit your doctor at the earliest sign/symptom to give you or your loved one the best treatment possible.

Posted by Made It Through Mum at 7:31 PM