Lido Cocina Tsina, a family Chinese restaurant chain, shows support to the heroes in the front lines who help fight the spread of COVID-19 by distributing food packs while the enhanced community quarantine is in effect.


Lido team members or Lido family as they call it, prepared and packed healthy and delicious meals and distributed within selected communities in Metro Manila. 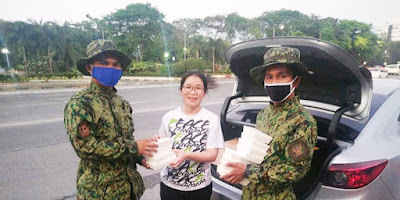 "As frontliners ourselves, we feel for those who take part in their commitment to serve our countrymen. This is the least we can do to help our healthcare workers, police and military officers, and government workers to show appreciation to what they are doing," says Lido's owner, Ms. Annie Wong.

For the past two weeks, the Lido family tirelessly reached out to personally thank our front liners in different hospitals. Health workers at Holy Infant Jesus, Philippine Children's Medical Center, Veterans Memorial Medical Center, De Los Santos Medical Center, St. Luke's Medical Center, Makati Medical Center, and Pasay General Hospital were among the recipients. The team also did not forget hundreds of personnel from the police and military forces that secure the borders.

There were also countless heartbreaking encounters with homeless fellows who are most in need of assistance from the government. They were also among the priorities of Lido during the distribution of food packs. Families from Brgy. Bagong Pag-asa, Brgy. Vasra, Brgy. Mariana and Brgy. Project 6 are among the beneficiaries during the first two weeks of distribution.

To date, the Lido team continuously extends its hands and finds better ways to send help to the front liners and the general public. Some Lido stores remain open to cater to take-out and deliveries.

To support the enforcement of social distancing and community quarantine, orders may be placed via www.lidodelivery.com, 8888-5436, Grab Food, Food Panda and Lalafood.

Posted by Made It Through Mum at 9:13 PM