FameUs and Asha -LIVE in Manila and Davao + GIVEAWAY

Last August 18, I was fortunate to be part of the bloggers meet up at Misono Yakitori Restaurant in Makati for the upcoming concert of the two rising KPOP (Korean Popular) sensations : FameUs and Asha. 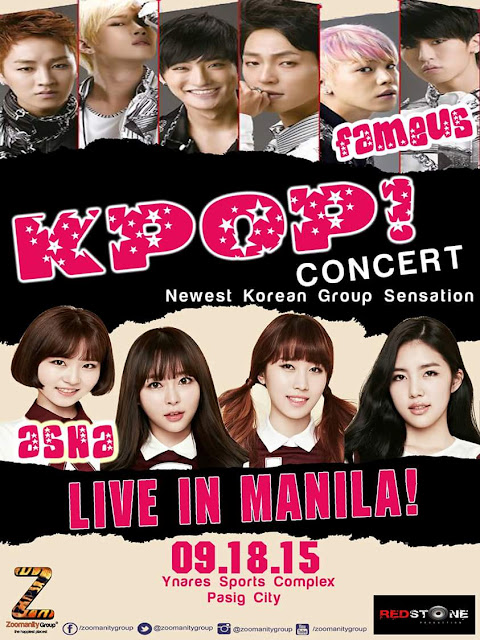 With the increasing popularity and amazing support of Filipino KPOP Fanatics in the country, Zoomanity Group and Redstone Media Production are proud to present to you the newest group sensations in Korean POP music scene, FameUs and Asha.
These two fast rising groups are ready to capture the hearts of their Pinoy fans in their two major concerts: September 18, (Friday)in Ynares, Shaw Blvd and October 2, (Friday)in SMX Davao.

FAMEUS is a six member boy group band. It consists of Hansaem, Kudo, Junghoon, Daeyoung, Doah and Hanyoung. They have been promoting not just in Korea and Philippines but also in Japan and China. They recently launched their first single "CRAZY" that has been sold out. Because of its success they released their second digital single called " The Only Stupid One". They already done a series of shows in the country but this will be their biggest concert in the Philippines.

One lucky winner will win 2 GOLD tickets! How? Follow these simple mechanics:

* Make sure your accounts/posts are PUBLIC
* Unfollowers will be detected and will be blocked on succeeding giveaways.
* Contest Period August 30 - September 10 MN
* Announcement of winner will be on September 11.

♥♥♥
Thank you for visiting my blog! I would love to hear your thoughts . Your comments are always welcome and appreciated!
Posted by Made It Through Mum at 6:42 PM